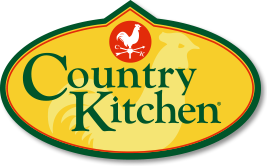 Country Kitchen began with a dream . . . . .
It started with the vision of an enterprising young boy by the name of Bill Johnson. At the age of 14, Bill Johnson left his Kentucky home and headed for the "big city" of Cincinnati, Ohio. He was armed with only an eighth-grade education and a pocket full of change. Bill's future began when he was hired to work at a hamburger stand. The hamburger stand business required a strong work ethic and a knack for getting along with people. Bill Johnson had an abundance of both. He also had the drive to take the next step. In 1939 he and a friend, Bill Goodman, pooled their resources, totaling $400, and made a down payment on some restaurant equipment. They rented an empty storefront and opened a restaurant. The sign out front read "Country Kitchen." Customers began coming in for great-tasting hamburgers for only a nickel (or six for a quarter) and for delicious steak sandwiches for a dime.

Change is good.
Perhaps more than any other restaurant in history, the Country Kitchen concept evolved to meet the changing lifestyles of our guests. Through the years we have served guests as a nickel hamburger stand, or as a full-service diner, then a hip drive-in, to a breakfast & coffee shop, and today our guests enjoy a contemporary full-service restaurant.