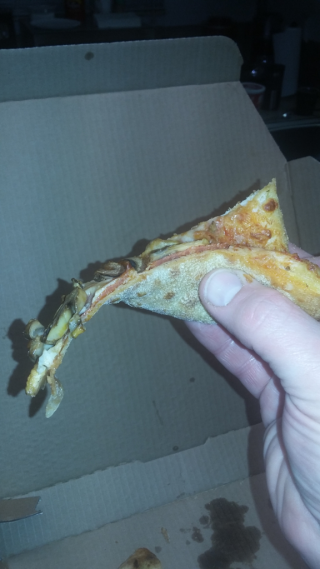 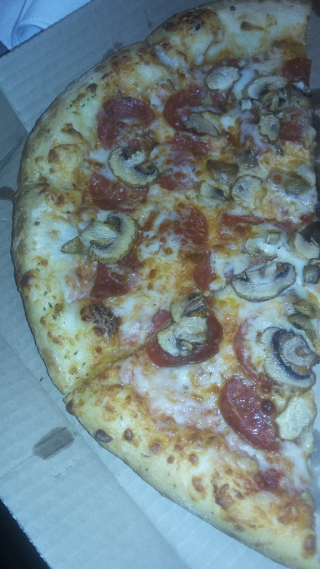 I ordered a Dominoes pizza when my friend was here from Ca. It was the worst pizza Ive ever ordered! They are no longer ever going to get my Business!

Oh my God, the sauce is terrible. You know that waft you get when you walk past a full foster on a hot summer day? Yeah, kinda like that. That's the only way I can describe the after taste. It's like someone who tried making spaghetti sauce for the first time, and had to guess based on a picture someone once described to them several years ago. Like they knew there was tomatoes, something.. something... Dark side...
I'd rather eat little caesars that's had a bite taken out and has been in the fridge for 6 days...
I'm sorry... I...I cant eat this... the crust is really good, but that sauce.. yuck! I.. I dont know.. maybe I'll try putting a couple of slices in the dishwasher to see if I can get that sauce off. It's like, I can even say it's like you wiped your ass with it, that'd actually be an improvement.

Oh my God.. I just can't let it go.. it's the worst sauce I've ever had... Oh my God... It's the worst pizza... And I've had an 0.89¢ totinos party pizza cooked in a microwave.. Jesus Christ! Domino's is the haggis of pizza.. please for the love of God and all that is holy, I had nightmares about having to eat another slice..woke up in a cold sweat screaming "no..noooo! .. Thank God it's raining outside, I'm going to go roll my windows down and leave the doors open to wash the smell out of my car
I tried giving it to my dog and she just sat there barking at it for like 4 hours. Eventually, I just threw it into the trash, but then the raccoons came and threw rocks through my windows! They didn't even run away afterwards either. They wanted me to see them, I'm pretty sure one of them flipped me off! I didn't know what else to do with it, it's not like I could just bury it in the back yard, it might contaminate my septic tank. I kid you not, I just wanted to throw it back up into the toilet, but my body instinctually stopped me just so I wouldn't have to taste it again! Like in the movies when they toss a grenade into a room, and someone tosses it right back out again.. Jesus Christ, it's like it's not even Pizza... They should be required by law to have to call it "peetsah."... including the quotation marks!
Am I exaggerating?
Clearly.
But not nearly enough. All the oregano in the world couldn't save that sauce... whoever came up with that sauce recipe should be neutered, and sent to shovel trash on and off barges for the rest of their life.
Dominoes may have seriously ruined pizza for me period. Yeah, it's really that bad. "Domino's, the haggis of pizza"

I agree, Dominos Pizza is THE worst pizza. I will NEVER eat another Domino’s Pizza.

Buy me a coffee