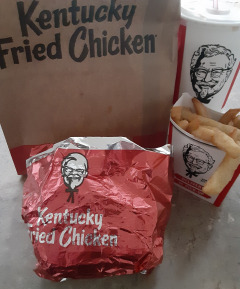 There's been a chicken sandwich war going on in fast food, it started in 2019 and it's still going on today.

Shots fired!  Chick-fil-A made headlines in 2019 becoming the third largest fast food chain, led with their classic chicken sandwich.  Popeyes reacted by putting a new chicken sandwich on the menu and consumers went crazy over it, so crazy in fact, Popeyes ran out of ammo. Already armed with a spicy chicken sandwich, Wendy's entered the battlefield that year by bringing back their spicy chicken nuggets, fans of the item went in a Twitter frenzy.

Where was KFC in all this?  They didn't really enter the war until this year, introducing consumers to their Crunchy Chicken Sandwich in January, 2021.  Competitors served up over 4 billion chicken sandwiches in 2019 and sales jumped up another 4% in 2020 before KFC fired their first shot, but boy was it a good shot!

Simply called the "KFC Chicken Sandwich" it features and extra crispy chicken filet on a buttered brioche bun and topped with pickles and the option of classic or spicy mayonnaise.  I opted for the classic and I look forward to trying the spicy version, but I'm sampling everybody's classic sandwich first, to see who makes the best one. 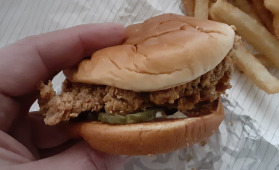 Not a brioche bun

About their classic, crispy chicken sandwich.....  It's about time KFC!

In this Chicken Sandwich War Challenge, sandwiches are evaluated and scored on the following criteria:  Visual appeal, the meat, bun, meat to bun ratio, crunch factor, the pickle/mayo and of course, overall taste.  There are 1-9 points available for each category for a total possible total score of 63. 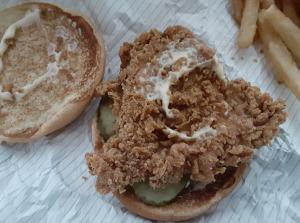 The KFC Chicken Sandwich has a nice visual appeal with that 1/4 pound chicken breast fillet breaking the borders of the bun which was a standard bun by the way, NOT brioche.  The pickles are nice and thick, a perfectly tart element to compliment that extra crispy chicken.  And the sandwich isn't over dressed, the amount of mayo was just right.  KFC may have entered the sandwich war late, but they did their sandwich right.  The KFC Chicken Sandwich scored 55 out of a possible 63 points and I'm giving it 4 out of 5 Bachelor on the Cheap stars.  Priced at just $3.99, it's definitely a repeat buy even without a brioche bun.

The KFC visited on this occasion is located at:  1251 S Woodlawn St, Wichita, KS 67218.  From time of order to receiving my meal took about 3 minutes.  Standard drive through service, nothing special.