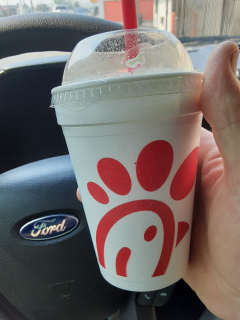 While out and about running some errands yesterday, I decided to pull into a Chick-fil-A and get a peach shake.  I've never had a peach shake before and I've heard about how good the Chick-fil-A shakes are, so it was time to find out just how good.

Here's the description from the Chick-fil-A website: Hand-spun the old-fashioned way, this refreshing milkshake features Chick-fil-A® Icedream® dessert and peaches, topped with whipped cream and a cherry (except when served via delivery). Available seasonally for a limited time.

Suffering through the Chick-fil-A drive through, have you ever been in their drive through when their tablets go down?  It was hurry up and wait.....  But the wait was worth it!

The shake was quite tasty!  A perfect blend of ice cream, milk and oh my that peach!  The shake was LOADED with chunks of peach, Chick-fil-A doesn't hold back on this seasonal treat.  Topped with the whipped cream and cherry, the frothy goodness really hits the spot!

Costing me $4.25, it is a bit pricey compared to other fast food shake offerings, but it is a very good shake.  I'm giving the Chick-fil-A Peach Milkshake 4 out of 5 Bachelor on the Cheap stars.  The price holds it back from being a 5 star shake and it's worthy of being a repeat buy but perhaps not as often as I'd like while it's available.

The Chick-fil-A visited on this occasion is located at 7990 E. Central, Wichita, KS. 67206.  Chick-fil-A can boast to having the most professional, courteous staff in fast food.  Service with a smile! 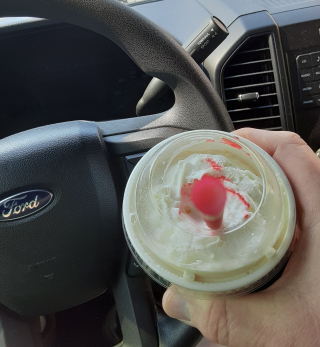 Peach shake minus the cherry which was inhaled pre-pic

Sam's Club vs. Costco Wholesale: Which membership is the best? - The price difference is SHOCKING! 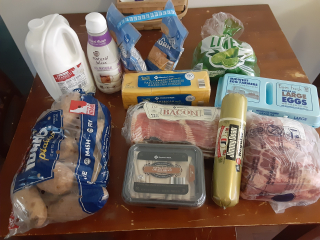 A few groceries purchased at Sam's, how much will the same things cost at Costco?

My Costco membership is up for renewal and I like Costco, it's conveniently close to where I live and I've saved a lot of money buying there vs. a typical grocery store or retail outlet.  Another benefit to a wholesale club membership is the HUGE savings in the purchase of gas through the course of the year.  Savings at the pump alone makes the membership worthwhile, you don't even have to step inside and buy groceries, clothes or printer cartridges to realize the benefit of a membership! Costco and Sam's are typically FAR below local area gas prices, usually about 25 cents per gallon if not more cheaper.

But is Costco THE best wholesale membership club to belong to?

A club membership is a very good thing to have, you really can save A LOT of money buying in bulk and both Sam's Club and Costco offer a lot of advantages/benefits to having a membership vs. shopping at the mainstream grocery store or chain retail store.

So is one club better than the other?

Last Tuesday, I purchased a few groceries from Sam's Club and again, I got a nice assist from Cindy.  Sam's has 'Scan & Go', no app required, you can scan items as you put them in the cart!  On Saturday I visited Costco for a price comparison on those same items.  I can see a downside to that already, Cindy won't be "Checking me out".....   See what I did there?.....

Just LOOK at the price differences below, Sam's Club wipes the floor with Costco!  Costco may be cheaper than the mainstream grocery stores like Kroger, but there's no doubt they're more expensive than Sam's Club!

So even though I'll be losing the convenience of location - Costco is just a hop, skip and a jump from where I live - I will NOT be renewing my membership with Costco.  The cheaper prices at Sam's clearly show I'll save more money there.  They have a larger variety of product offerings, they don't push (a.k.a. limit you to) the organic crap and the discounted price of gas is virtually the same for each wholesaler.  Thank you Cindy for showing me the value!